Okay, Peeps get your minds out of the gutter!(or maybe it's my mind)

For those of you who don't now what "that" is....I am talking about or rather "not" talking about "the horizontal mambo", "shagging", "getting lucky", "nookie", "knockin' boots", "a roll in the hay", "making whoopie", "doin' the hoodileehoo" (that one is probably only used by myself and a girlfriend), "making love" or what is more commonly called sex.
Ha! for someone who says she is not talking about sex, I sure have talked about it a lot. Okay....moving on.

Now...what I started out talking about, before I got sidetracked, is actually exercising in bed. You know, leg lifts, crunches, stretches, etc.
I have always, well since my 20's or so, done exercise in bed either right before I go to sleep, usually in an attempt to encourage sleep or when I wake up...that's when I do the most stretches.
So, my point, I do have one.....ummmm...oh yes....I started to wonder last night how many others regularly exercised in bed.
I had a vague memory of a book on doing yoga in bed. So I googled this A.M. and found it.
Yoga in Bed by Edward Vilga...I think I owned a copy of this once or maybe just thumbed through it, anyway it looks good and reminds me of what I try to do with my bedtime exercise. 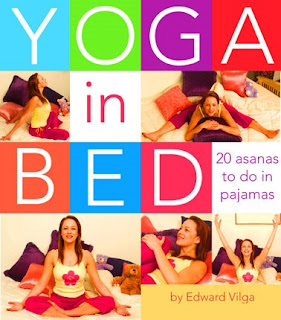 I even found a youtube about Yoga in Bed (of course I did...ya have to love youtube..oops, it's not youtube).

Yoga In Bed - Click here for the most popular videos

Further googling led me to Bed Top Yoga by Carol Dickman, another book I'll have to check out. Of course, being the Googleholic that I am, I had to keep googling and I found ,OMG, lots of stuff on exercising in bed. Should have known it wasn't an original thought.

I found an article that says that Exercise in Bed Improves Sleep and Fitness .
Here's a quote from that article:

Tartell says, "No matter what your age or physical condition you can benefit from exercising in bed at any hour, whether it's morning, afternoon and even when you awake in the middle of the night, often with those seemingly uncontrollable, nagging thoughts."
Dr. Tartell says that kind of repetitive thinking, which keeps many people awake late into the night, has been shown to dissipate after doing the "Get Fit In Bed" exercises, and is often followed by a return to normal sleep.

Yep, I can totally understand that. I often find my mind going all over the place when I try to go to sleep.

Anywhosit, there seems to be a lot of research and such behind this idea.
So, when y'all crawl or fall into bed tonight, remember to do those leg lifts, stretches and crunches.
I don't think I need to know about anything else you do.

Love, Laughter, Leglifts and Blessings,
La
Another Random Thought from the Goddess La, Storyteller/Storysinger at 12:39 PM

Because I have pretty much destroyed one knee, yup that's the only place coushy enough to exercise. I hadn't thought of Yoga in bed though.. hmmmmm I'll have to check that out.