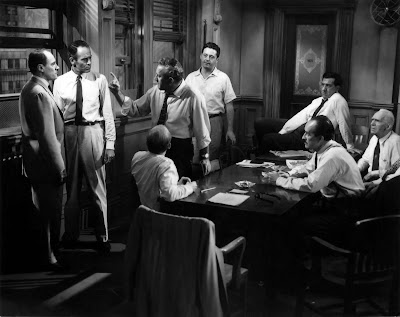 For those of you who may not have seen the movie, it's basically about:

A jury made up of 12 men as they deliberate the guilt or innocence of a defendant on the basis of reasonable doubt. The story begins after the closing arguments have been presented to the judge. The question they are deciding is whether the defendant, a teenage boy from a city slum, murdered his father. The jury is further instructed that a guilty verdict will be accompanied by a mandatory death sentence.
The plot of the film revolves around their difficulty in reaching a unanimous verdict, mainly due to several of the jurors' personal prejudices.

(this info came from Wikipedia)

Anyhoo, I highly recommend this movie which, BTW, you can find on Youtube, of course.

Another Random Thought from the Goddess La, Storyteller/Storysinger at 2:54 PM