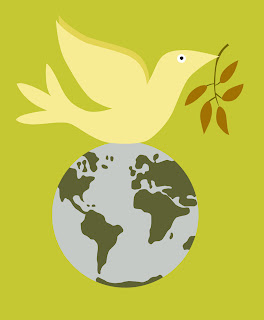 So yesterday, June 4th, was the official Blog for Peace day and me being somewhat date challenged forgot.
But I figure better a day late than not at all.
The first place I saw this idea was at Mimi's Blogblast for Peace website.
If you want to know more about this movement please visit that site.

I love telling stories that advocate peace.
Stories that make people think.
There are two wonderful storytelling resources that advocate peace.
Both of them are on my book shelf.
The first is Peace Tales by Margaret Read MacDonald and the second is Spinning Tales Weaving Hope with many editors.
Here are a few of my favorite peace tales.
(For thoughts on Peace, check out my Mother Theresa Blog .)

Not Our Problem
The King sat with his Adviser eating honey on puffed rice.
As they ate they leaned from the palace window and watched the street below.
They talked of this and that.
The King, not paying attention to what he was doing, Let a drop of honey fall onto the windowsill.
"Oh sire, let me wipe that up," offered the Adviser.
"Never mind," said the King.
"It is not our problem.
The servants will clean it later."

As the two continued to dine on their honey and puffed rice,
The drop of honey slowly began to drip down the windowsill.
At last it fell with a plop onto the street below.
Soon a fly had landed on the drop of honey and begun
His own meal.
Immediately a gecko sprang from under the palace and with a flip
Of its long tongue swallowed the fly.
But a cat had seen the gecko and pounced.
Then a dog sprang forward and attacked the cat!

"Sire, there seems to be a cat and dog fight in the street.
Should we call someone to stop it?"
"Never mind," said the King.
"It's not our problem."
So the two continued to munch their honey and puffed rice.

Meanwhile the cat's owner had arrived and was beating the dog.
The dog's owner ran up and began to beat the cat.
Soon the two were beating each other.

"Sire, there are two persons fighting in the street now.
Shouldn't we send someone to break this up?"
The King lazily looked from the window.
"Never mind.
It's not our problem."

"Sire, a number of people are fighting in the street now.
Perhaps we should call someone to break this up."
The King was too lazy even to look.
You can guess what he said.
"Never mind.
It's not our problem."

Now soldiers arrived on the scene.
At first they tried to break up the fighting.
But when they heard the cause of the fight
Some sided with the cat's owner.
Others sided with the dog's owner.
Soon the soldiers too had joined the fight.

With the soldiers involved, the fight erupted into civil war.
Houses were burned down.
People were harmed.
And the palace itself was set afire and burned to the ground.
The King and his Adviser stood surveying the ruins.
"Perhaps," said the King,
"I was wrong?
Perhaps the drop of honey WAS our problem."

How many situations have we said are not our problem??
Eventually anything can be your problem if it is allowed to get out of hand.

Advice from a Three Year Old
There was once a famous artist who decided that he wanted to study the works of Buddha and attain enlightenment. He thought that the best way to do this was to seek the most famous and wisest teacher and ask him, "What was the most important thing that Buddha taught?"

The artist traveled to the other side of the world to find the teacher he sought. When at last he found the teacher, he asked him, "What was the most important thing that Buddha taught?"

"Do not harm anyone and only do good," was the teacher's immediate response.

"What?" shouted the indignant artist. "You are the most famous of teachers! You are supposed to be wise beyond your years! And this is all you can tell me? A three year old could have told me the same thing!"

The teacher, who had sat quietly through the entire speech, looked at the artist and said, "A three year old could have said the same thing but it is a very difficult thing to practice, even for one as old as myself."
(A Zen tale retold by LLL, Storyteller)

Long time gone, there was a big gatherin' of animals and fowls and birds that got together to talk about everybody behaving better.
Instead of talkin' about how to improve things, everyone started talkin' about how other folks were doin' bad things.

Now right then, Old Brer 'Coon just couldn't stand all the fussin' and he called the meetin' to order.
"Friends" he said, " we all have got to do a lot better or we're goin' to end up bein' in a really bad way. What do y'all think about us tryin' to reform ourselves?"

Brer Tiger jumped right up and hollered "I'm all for reform."
"I seen Brer 'Coon stealin' corn almost every night and it has to stop!"

Well then, Sis Cow chimed in with, " I'm for reform too. I want y'all to know that Brer Tiger has got the blood of my young'uns in his mouth, and it's got to stop!"
Brer Elephant stepped in to say his bit, "Look who's talkin'! Sis Cow is eatin' up all the grass and leavin' none for us Elephants."
Brer Wolf shouted, "Men are goin' around usin' knives and guns! It just ain't safe no more to go after'em."

Now at that point, Old Brer 'Coon tried to call the meetin' to order again."Look y'all, we gotta start gettin' less complaints and get more reform! Now who's got somethin' positive to suggest?"

Well, Brer Deer jumped on up and said that all the animals had to stop eatin' meat.
Brer Wolf said "No that don't make no sense, what we need is for all the animals to stop eatin' grass."
Sis Chicken started cacklin' and said" No, no, no! Y'all have all missed the point. What we need is to kill all the snakes."
To which Brer Fox shouted, "Hey, I rent my cave to the snakes! What we have to do is kill all the worms."
Now y'all know the birds didn't like that! They figured they would starve if all the worms were killed.

And so the arguin' continued.
Every animal tryin' to keep what was good for him and get rid of what his neighbor wanted.

At long last, Old Brer 'Coon stood up and said "That's enough! What we need to know is if any of you folks are willin' to agree to give up somethin' you like for yourself. If ya are then say so, now."

He waited. But nobody said a word. They just sat there so quiet that ya could have heard a tater growin'.
"This is sure 'nough a sad and sinful world we are livin' in," said Brer 'Coon. "Everybody is just findin' fault with everybody else. I say, it's time to quit this meetin' and go back to your own homes."
Old Brer 'Coon shook his head and said, "You can begin charity next door. But if you want to reform, it's got to begin at home."

And that's all I have to say about that!! 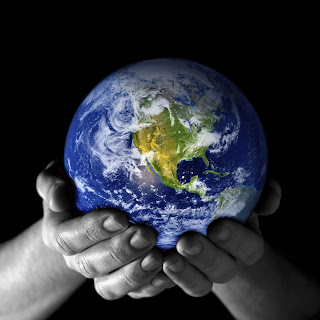 Holding Up the Sky
One day an elephant saw a hummingbird lying flat on its back on the ground.
The bird's tiny feet were raised up into the air.

"What on earth are you doing, Hummingbird?" asked the elephant.

The hummingbird replied, "I have heard that the sky might fall today. If that should happen,
I am ready to do my bit in holding it up."

The elephant laughed and mocked the tiny bird.

"Do you think those little feet could hold up the sky?"

"Not alone," admitted the hummingbird.
"But each must do what he can. And this is what I can do."

Love, Laughter, Peace and Blessings to you!
Another Random Thought from the Goddess La, Storyteller/Storysinger at 4:36 PM

This is a wonderful peace post. I love your stories! This BlogBlast is called "A Revolution of Words"....this blog clearly demonstrates that power.

Peace to you and yours,
Mimi Lenox