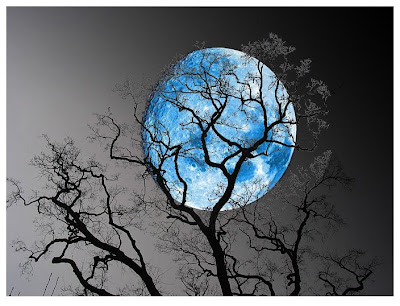 This evening, New Year's eve, December 31, 2009, we'll have a blue moon.
Contrary to what some believe, there is no real noticeable difference between a Blue moon and a regular moon. The term Blue Moon refers to when there is a second full moon in the same calendar month. In the past, every full moon throughout the year was given a folk name.

"According to some folktales during a full blue moon, the moon was said to have a face and talked to those in its light. Some pagan beliefs hold the second full moon in a calendar month holds the knowledge of the Goddess and contains very powerful three-fold the energy of a regular full moon. Special rites and rituals were held only on a blue moon night.
Sill other traditions believe the different moon phases represent the transition of knowledge within the Goddess. The maiden is represented by the waning moon, the full moon represents the mother goddess and the waxing moon the grandmother goddess or crone. When the blue moon enters the cycle it is said to be the transition of the crone to the divine level of existence or the great transition."

So, while you're celebrating the New Year, take a moment to check out the Blue Moon.
The next Blue Moon won't be around until August of 2012.

Ooooo! Here's a little music to watch a Blue Moon by....

Another Random Thought from the Goddess La, Storyteller/Storysinger at 9:00 AM