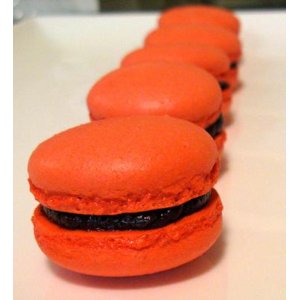 Yes, I said macaron not macaroon! Today, in France and in New York City, is Macaron Day.
"Jour du Macaron" is an annual celebration of the meringue-based "cookies" that come in a rainbow of colors and fillings.
Pierre Hermé began this event in 2005. He offers free macarons in his Paris stores, as do other participating members of the Relais Desserts association, which represents the top pastry chefs in the world.
The event supports  Autour des Williams, a charity that funds research into rare diseases and provides assistance to those afflicted by Williams-Beuren syndrome. Donations to the charity are accepted in each participating shop. 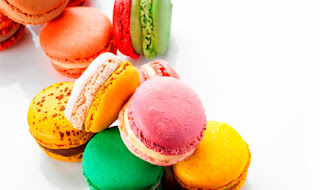 What, exactly, is a Macaron???

"A macaron is a sweet confectionery made with egg whites, icing sugar, granulated sugar, almond powder or ground almond, and food coloring. The macaron is commonly filled with buttercream or jam filling sandwiched between two cookies.

Its name is derived from an Italian word "maccarone" or "maccherone". This word is itself derived from ammaccare, meaning crush or beat, used here in reference to the almond past which is the principal ingredient.

It is meringue-based: made from a mixture of egg whites, almond flour, and both granulated and confectionery sugar.
The confectionery is characterized by its smooth, domed top, ruffled circumference (referred to as the "foot"), flat base, mildly moist and easily melted into mouths.
Macarons can be found in a wide variety of flavors that range from the traditional (raspberry, chocolate) to the new (truffle, green matcha tea). The fillings can range from jams, ganache, or buttercream.


Since the English word macaroon can also refer to the Coconut macaroon, many have adopted the French spelling of macaron to distinguish the two items in the English language. However, this has caused confusion over the correct spelling of the cookie/biscuit. Some recipes exclude the use of macaroon to refer to this French confection while others think that they are synonyms."

The following links are some of my favorite places to read about macarons and find macaron recipes. And no I haven't made any at home....yet! Making macarons takes preparation....I'm still working on it  :-P 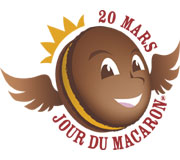 1.To make the macaroons: Preheat the oven to 350 degrees. In a medium bowl, whisk together confectioners' sugar and ground almonds. In the bowl of an electric mixer fitted with the whisk attachment, whip egg whites with salt on medium speed until foamy. Increase speed to high and gradually add granulated sugar. Continue to whip until stiff glossy peaks form. With a rubber spatula, gently fold in the confectioners' sugar mixture until completely incorporated.

2.Line baking sheets with parchment paper; set aside. Fit a pastry bag with a 3/8-inch #4 round tip, and fill with batter. Pipe 1-inch disks onto prepared baking sheets, leaving 2 inches between cookies. The batter will spread a little. Let stand at room temperature until dry, and a soft skin forms on the tops of the macaroons and the shiny surface turns dull, about 15 minutes.

4.To fill the macaroons: Fill a pastry bag with the filling. Turn macaroons so their flat bottoms face up. On half of them, pipe about 1 teaspoon filling. Sandwich these with the remaining macaroons, flat-side down, pressing slightly to spread the filling to the edges. Refrigerate until firm, about 1 hour.

Another Random Thought from the Goddess La, Storyteller/Storysinger at 3:43 AM