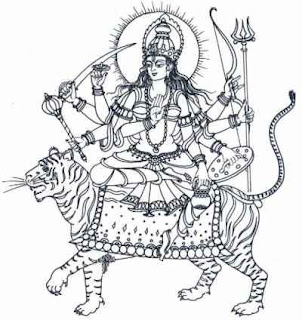 The Hindu Goddess Durga is the incarnation of Devi, the mother/supreme goddess.
Durga's name means "inaccessible or invincible" in Sanskrit.
Durga is depicted as a demon fighting warrior with 10 arms, carrying weapons and riding a lion or a tiger.
She is considered, in this form, tobe the embodiment of feminine and creative engergy, a form of Shakti.
The Goddess Durga came into being when the demon, Mahish, threatened the the existence of all of the gods. Each god contributed something to the creation of Durga.
In the video below, the fabulous Sister Unity, tells the story of the creation of the Goddess Durga and her fight with the demon Mahish.
Enjoy!
Love, Laughter, Peace and Blessings y'all!

Another Random Thought from the Goddess La, Storyteller/Storysinger at 12:46 PM

Durga is a goddess created from the powers of all gods to kill the demon Mahiasura. Goddess Chandi is said as the fierce form. Invoking her blessing through fire rituals removes negativity, evil forces in life.